I am Brandon Tobiassen. I grew up on a farm in a small mountain town called Nevada city, CA. I blame the fact that its called Nevada but is located in California for my dry, twisted view on the world and the humor I find in every moment. I now reside mostly in Seattle, WA but thanks to an unexpected fall into a modeling career while living in LA straight after high school, I've managed to live in a few different countries and multiple cities and hence i have developed an undying NEED to travel. I thrive on the chaos and uncertainty of traveling and meeting new strangers. Follow along as I traverse all sides of traveling and everything that comes along with it.

AlwaysDeparting.com claims no credit for any images posted on this site unless stated. Images on this blog are copyright to its respectful owners. If there is an image appearing on this blog that belongs to you and do not wish for it appear on this site, please E-mail AlwaysDeparting@gmail.om and we will promptly remove said photo.

It felt like a scene cut from a Disney movie, the type where a fair maiden is being aided by woodland creatures to sweep a dirt floor.  Here I am sitting atop a stone littered mountain, staring into an endless horizon of foggy blue hills and steep, tree-cluttered slopes. The beastly white, chiseled face of Mount Rainier peaking over the lesser hills in the foreground. Reaching into the plastic, zip-locked bag full of almonds I had stuffed into my pocket, I remove a handful of nuts and slowly extend my arm, resting it on the slab of granite to my left. After about 30 seconds a little critter in a fur coat emerges from out of the rock pile, showing no hesitation as it approaches my hand.

Resting over my palm like a tiny, fluffy restaurant patron, sitting down for his regular mid-week lunch, my new friend begins its feast. One by one the chipmunk picks up the almonds nestled in the palm of my hand, spending a few seconds moving them around the outside of its mouth, moistening them with its tongue and then packing them into its cheek. The cold wind cuts through my sweatshirt and bites at my lips and while sending chills down my back, making it hard to keep still. Six almonds stored away in a matter of minutes, the tiny striped rodent scurries towards the edge of the granite. Taking a second to look back at the two remaining almonds in my hand, as if contemplating somehow stretching its already building cheeks to accommodate the stash of leftover food. Deciding against the extra load the chipmunk disappears down the rocky slope in front of me.

At this point the feeling of pure joy is extinguished by the pain my legs and feet as I struggle to get to my feet, my limbs trembling under the weight of my own body. After the four hours of constant incline to reach the lookout tower perched on the summit, my body is exhausted beyond imagination. Although my face is branded with a smile bigger than the mountain itself, inside every muscle feels as though its crying out in agony. And I still have to climb back down this mountain.

We started early, meeting in a cafe parking lot at 6:45 AM to fuel up on caffeine before making the hour drive east from Seattle towards Snoqualmie Pass. Neither my friend, nor I had ever hiked the Granite Mountain Trail before but the co-worker that had first informed me of it had warned me that it was not anything casual. After an hour drive down Interstate 90, followed by another hour driving to the end of the wrong dirt road and back, we arrive at the Lake Pratt Trailhead.

Some light stretching, coffee finished, packs on and we are one our way down the path. Although our legs are still in the process of waking up, the start of the trail is relatively easy. Slowly making its way through moss draped trees, over dry creek beds and up mild inclines until reaching a split in the trail. To the left the trail gradually climbs its way to Lake Pratt, or so i have been told We went up the stairway to hell on the right.

The path quickly begins to climb while you side step jagged granite teeth and tree roots fighting to reclaim the trail. Each step having to be meticulous while at the same time completely spontaneous as we struggle through steep switchbacks. The distance to the top is only four miles long but you climb nearly a thousand feet in elevation for every mile gained. Using my altimeter on my watch to track our progress, we realize that we could only climb about 100 feet in elevation before the burning in our legs beam too much and forced us to halt our progress and give our legs time to catch up. Sometimes these breaks resulted in one or both of us sprawled across the rocky trail, asking a higher power, “why the f*** and I doing this?!” which was only answered by more trail to climb 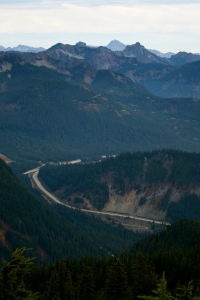 A little more than the halfway point, the trail breaks out of the treelike and we find ourselves in a steep meadowy area. Without the shadowing of the trees to block our view, we begin to get a feel for the perks of the summit in way of incredible views of Mt. Rainier and the Cascade Mountain Range. This part of the climb isn’t as inclined but the trail itself is extremely eroded and rocky, making it difficult to traverse and causing me to slightly roll my ankle when coming back down through this area. Luckily the injury wasn’t too bad and after a short while the pain subsided. 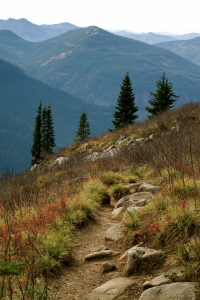 The trail plateaus and staggers around a small pond, from here we could see the lookout tower sitting on top of a massive pile of broken granite boulders. once leaving the water hole we circled towards the backside of the lookout and found ourselves faced with the harshest climb of the entire route. Quick switchbacks over stacks of rocks and around small pine trees, the climbing was brutal, hands and feet, animalistic movements.

Coming around a bigger pine tree we are met by a smiling elderly man, equipped with dual walking sticks and looking as though he has done this a time or two. He makes a joke about my friend and i looking like twins. We laugh and remark on the winds chilly bite as we pass. After parting ways my friend and I joke about the man being in better shape than us.

Another hundred foot climb and we have made it to the tower, looking out in all directs towards hundreds of mountains and distant ridges all painted in misty shades of blues and purples with the closer slopes speckled in greens and oranges. We take rest at the foot of the lookout, the entrance to the tower is chained shut. Normally occupied by volunteers from June until August, but isolated and out of use this deep into October. Later I read on a wiki page for the trail that the tower was originally built in 1924 and was rebuilt 31 years later, I wouldn’t have wanted to be tasked with building a house on something I can barely hike to. 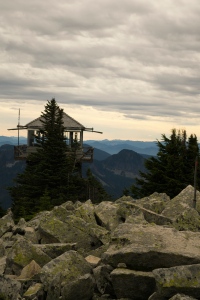 We are immediately greeted by our chipmunk friend, in fact our entire stay at the summit was infested by these furry friends who were not afraid of us in the slightest. Obviously accustomed to receiving treats from visiting hikers, the many rodents followed us wherever we ventured around the summit. They became almost too friendly while we sat and ate lunch on the backside of the peak, climbing up our legs to join in our meal. 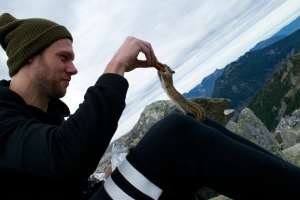 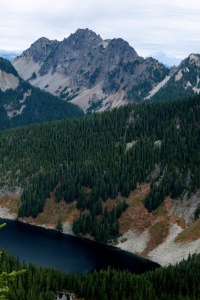 After about an hour on the top we begin our journey down. Descending was equally panful and struggling as the way up. Our legs trembling with each step down. Hoping that each switch back would be the last and seating the trail and my own memory for any clue of the distance still left to go. But the journey up seems as though it took place days ago and my mind acts as if I am a different person than the one who ascended this place only hours before, maybe I am.

Reaching the bottom in a dreamlike state a couple of hours before leaving the top, my mind having done little but toss one foot in front of the other for hours now. I rest on the tail of my car and try to find relief for my body, but at this point everything feels numb and hurts at the same time. We drop our bags in the trunk and begin our drive home. It’s over, we faced down the stone mountain and limped away the victors. Beaten, bruised, but better off.

View all posts by alwaysdeparting

2 thoughts on “A View Worth Fighting For: Granite Mountain”